During my childhood, I was often jokingly referred to by school mates as the “bookworm,” spending hours in the library, looking for books I hadn’t read yet.

In retrospect, some of the classics we had as syllabus books (Hard Times by Charles Dickens, the Shakespeare dramas, and Cry the Beloved Country by Alan Paton) had a great influence on sensitizing me to the injustices of apartheid in South Africa where I grew up.

The ten books that I have chosen are not in chronological order but are those books I return to reading regularly. There is always another aspect that reveals itself, very much like walking a pilgrimage path the second or third time and discovering things that you just didn’t see the first time around.

I am convinced that the information with which we feed our minds plays such a crucial part in who we are and who we become.

Reino Gevers grew up in South Africa’s KwaZulu Natal province, spending much of his early childhood on farms and in nature, interacting with the local Zulu people and bonding with their close connection to “Mother Earth.” Confronted with the social injustices of apartheid from an early age, he chose a career as a reporter for a daily newspaper in Durban.

He left South Africa at the age of 23, working for an international news agency in Hamburg, Germany for nearly 20 years.

On the brink of job burnout, Reino took his first pilgrimage walk on the Camino de Santiago in Spain in 2007, the first of now 13 pilgrimage walks. The walking experiences were transformational in delving into “people” rather than “news stories.”

Reino wrote two books on the Camino Walking on Edge, a fictional novel, and Deep Walking for Body, Mind, and Soul, on lessons learned on the Camino. He now runs a mentoring and health consultancy business based on the Mediterranean island of Majorca.

For more information on his retreats, workshops, and books, visit www.reinogevers.com. You can subscribe to his weekly blog at www.reinodiary.com 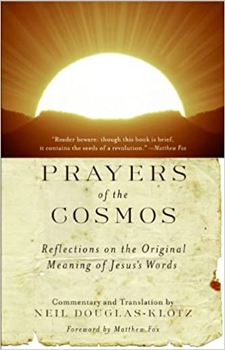 Prayers of the Cosmos: Meditations on the Aramaic Words of Jesus
By Neil Douglas-Klotz

This book is a real eye-opener in reinterpreting the Lord’s Prayer and the Beatitudes from the original Aramaic words spoken by Jesus.

True to the Mystic tradition, the words spoken by Jesus can be interpreted on multiple levels, touching the heart on a spiritual level transcending the boundaries of traditional religious dogma. It radically expanded my views of early Christian Mysticism.

I have memorized the Aramaic words that have enormous transformational energy, especially when spoken aloud or hummed while doing a “deep walk” pilgrimage. They can also be combined wonderfully with body movement and breathing exercises. It has become my personal bible on my pilgrimage walks and daily spiritual practice. 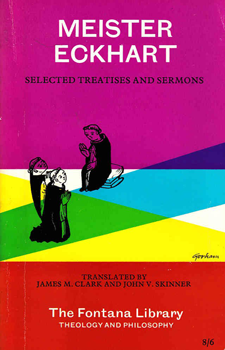 The teachings of the 14th-century Dominican monk Meister Eckhart, long-ignored by mainstream Christianity, are very much focused on extending spirituality to mindfulness for the Earth and all its inhabitants. His teachings were condemned as heresy during his lifetime and he had to face the Inquisition.

The authors have translated the original sermons into English. The meanings of the teachings often only unfold after reading them several times. Eckhart’s work falls into two parts. One part consists of sermons, tracts, and fragments in medieval German, while the other is a comprehensive exposition in Latin. I’ve found his works a great inspiration and very topical when it comes to the search for meaning and authenticity amidst the drumbeat of thousands of distractions during our time.

In one of his sermons, he emphasizes the need for Man “to strip himself of all images” as a necessary precondition for the inflowing of divine grace. “Man proceeded from God (not as an emanation, but by creation), and his highest destiny is to return to Him and to be united with Him. It is in the innermost of the soul, or spark of the soul, that this union takes place.” 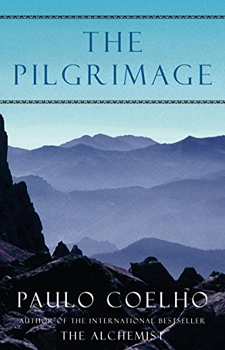 The Pilgrimage
by Paulo Coelho

This is one of the books that inspired me to go on my first pilgrimage walk back in 2007. Written long before the Camino de Santiago was rediscovered by the modern-day spiritual seeker, The Pilgrimage tells  of Coelho’s own spiritual journey on the Camino. It was written sometime before his best-selling novel The Alchemist.

The story is so much more than the physical journey, delving into the psychological and mental struggles that are very much part of walking the Camino. 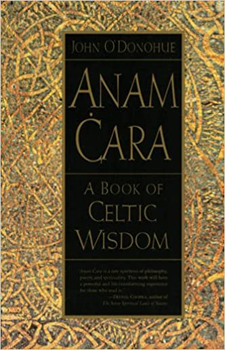 The Irish author was much influenced by his studies of Meister Eckart’s teachings. He expands on much of Eckart’s thoughts and those of ancient Celtic wisdom into beautiful modern prose. “Anam Cara” is the Celtic phrase for soul friend. His writings are a constant inspiration creating awareness for the cyclical path of life. We are born to become what we were meant to be when we incarnated as souls in the human body. Some of his words particularly resonate with my life philosophy: “You lose the balance of your soul if you do not learn to take care of yourself. You need to be generous to your self in order to receive the love that surrounds you.” We must remain attentive in order to become receptive to the whispers from the universe. In one of the chapters, he quotes from one of Meister Eckart’s teachings on losing too much energy in the doing when “many people wonder where they should be and what they should do, when in fact they should be more concerned about how to be.” 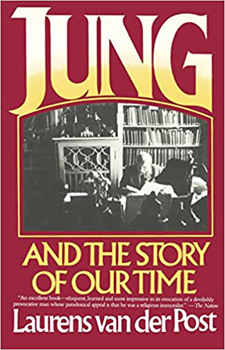 I first read this book many years ago and continue going back to it for reference. Laurens van der Post first met Jung shortly after World War II when he was in his seventies. The book is the story of their friendship and deep conversations on the collective unconscious mind. Jung studied Meister Eckhart and Taoist philosophy intently and it emanates from many of his writings. Jung becomes particularly interesting when looking at the shadow both on an individual and collective level. I have grappled all my life to understand the injustices of racism, xenophobia, nationalism, and hypocrisy of religion. If the shadow, the hurts, and the wrongs of the past are not transmuted they will always find expression in dysfunctional behavior. The hurt and humiliation of the white Afrikaner, suffered at the hands of British colonialism, mutating into apartheid nationalism. The humiliation of the Germans after World War I sowing the seeds of Nazi dictatorship. “Germany in the thirties seemed to be of such stuff as nightmares were made of. Everyone in it was goose-stepping towards an abyss in a terrible dream of sleep.” In apartheid South Africa, we were projecting onto the black man “an unknown part of ourselves, punishing him and at the same time punishing a dark, rejected aspect of ourselves.” 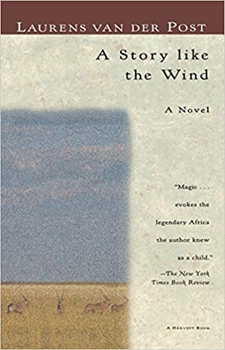 This book is a novel about a boy, Francois, growing up on a farm in the Kalahari Desert with Van der Post describing all the wonders of nature, and the boy’s secret friendship with a Kalahari Bushman whose life he saves. When reading the book, I was so much reminded of my own childhood where I spent much of my time on the farm of my grandparents. In the old spirit, the Zulu farmworkers would gather in the evenings around a fire, singing and beating the drums until well into the night.

The novel illustrates how the influence of colonialism and the white man gradually changes the ancient world of the Bushman and the balance of nature. The language is rich in its imagery, psychological depth, and wisdom. Francois discovers the world of spirituality and nature through his old Bushman nanny, and his walks in the bush but it is paradise doomed by conquest and Man’s greed. 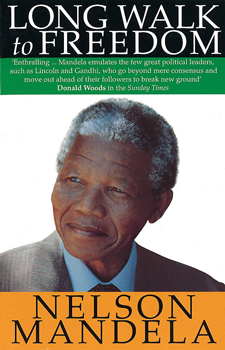 Nelson Mandela’s autobiography is a must-read. I first met the great leader as a journalist only a few months after his release in 1990 and also interviewed some of his fellow inmates. How the manuscript was smuggled out of prison is in itself a fascinating story. It is the story of survival against all odds, not losing hope in the pursuit of one’s dreams, even in the darkest moments of the soul.

One of Mandela’s best quotes: “No one is born hating another person because of the color of his skin, or his background, or his religion. People must learn to hate, and if they can learn to hate, they can be taught to love, for love comes more naturally to the human heart than its opposite.” 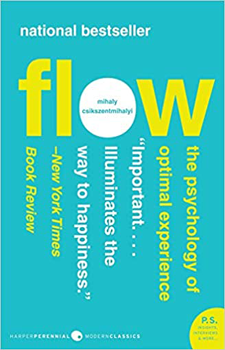 Flow: The Psychology of Optimal Experience
by Mihaly Csikszentmihalyi

There are countless books on self-development and the “way to happiness.” This one is different. It emphasizes the quality of experience and what experiences make life worth living. This was one of the books I read just prior to my first Camino walks when I was not in a very happy place, to put it mildly. An ancient Chinese proverb says: It’s better to see something once than to hear about it a thousand times.” Just like the deep walking pilgrimage experience, the author writes about climbing: “There is no possible reason for climbing except the climbing itself, it is a self-communication.” Although the flow or walking experience appears effortless, it requires strenuous physical and mental activity. “Repeatedly we question the necessity of our actions and evaluate critically the reasons for carrying them out. But in flow, there is no need to reflect, because the action carries us forward as if by magic.” 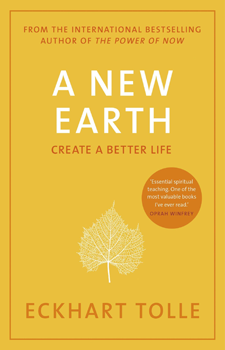 A New Earth: Awakening to Your Life’s Purpose
by Eckhart Tolle

Eckart Tolle is one of the great spiritual teachers of our time. This book is one of his best and I’ve read it several times, discovering new aspects each time. Tolle explains how the ego state of consciousness is responsible for much suffering of the individual and conflict in the world. There is a comforting thought from Tolle that the ego no longer needs to be shaken by personal tragedy once it has attained a new consciousness: “An increasing number of people no longer need to be shaken to have an awakening. They embrace the awakening process voluntarily even while still engaged in the outward cycle of growth and expansion. When that cycle is no longer usurped by the ego, the spiritual dimension will come into this world through the outward movement—thought, speech, action, creation—as powerfully as through the return movement—stillness, Being, and dissolution of form.”

For me, the walking pilgrimage is walking things off and walking into authenticity. Here, I go very much with Tolle: “Knowing yourself deeply has nothing to do with whatever ideas are floating around in your mind. Knowing yourself is to be rooted in Being, instead of lost in your mind.” 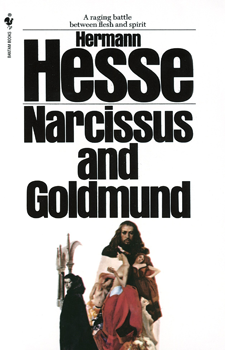 Narcissus and Goldmund
by Hermann Hesse

Hesse has managed to particularly illustrate the conflict between religion and spirituality in the nature of his two characters. Set in medieval Europe, Narcissus prefers to spend his life in the quiet surroundings of monastic life while Goldmund sets out into the world as a seeker of purpose and meaning in life. It is the polarity between the emotional and the contemplative, the flesh and the spirit, the external world and the internal. Especially poignant is Hesse’s description of Goldmund’s walk through villages and towns ravaged by the bubonic plague or Black Death. It contrasts vividly with the beauty of the senses, the art and the landscape. The novel, therefore, transcends time in more ways than. I have returned to reading this book several times after first reading it during my youth, wrestling with the religious dogma I grew up with.