The power
of now

A Guide to Spiritual Enlightenment
By Eckhart Tolle 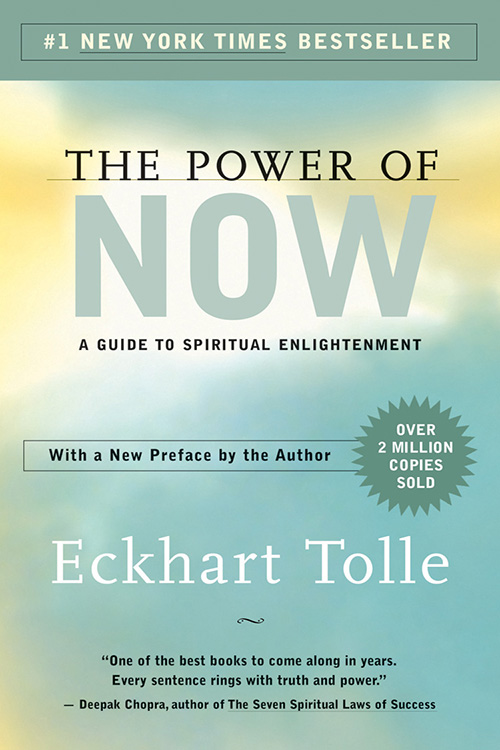 THE YEAR WAS 2002. I WAS LIVING IN SAN DIEGO.  IT WAS ONE OF THOSE YEARS WHEN LIFE UPSETS THE APPLE CART BY THROWING YOU A FEW CURVE BALLS.

My brother-in-law had died in February of oesophageal cancer. Too soon, I felt, at just 63. I’d flown home to England for his funeral. I planned to spend a week with my sister afterward, then continue on to Zurich, where I often worked with a major client, then return to the UK to spend more time with my sister, before flying back to California. I’d been traveling to Zurich every six weeks for two years. It was a lucrative and enjoyable gig. All the more so because it allowed me to bookend a week’s work with two long weekends of quality time with my family and my elderly mother who was living in a nursing home.

Just as we were leaving for the crematorium, I had an unexpected phone call.  Zurich was off.  Something had happened, and the company was filing for bankruptcy. In a split second, I’d lost a client, and a major source of my income had disappeared, along with a free passport to frequent visits back home.

By the time summer came around, I was floundering.  Then my mother died. She was 88, and while it was not entirely unexpected after having had a stroke ten years prior, it still came as a shock. I hadn’t seen her since February when my six-weekly trips to the UK had abruptly ceased. Struggling to make up the financial shortfall, I couldn’t justify the expense.  I’d been wracked with guilt about that; even though my mum didn’t always know I was, I knew who she was.   And I hadn’t seen her in six months. Now she was gone.

I knew it wasn’t my fault that Zurich had tanked. But my ego and self-esteem had taken the blow personally. It’s hard to remain positive when guilt and anxiety hijack your emotions. It’s hard not to get fearful when you watch your savings dwindle. Business was slow, and I’d never been in the position of having so few clients. Worry was slowly morphing into something deeper and darker. The thought of having to leave the USA and return to England for good was pushing me toward panic.

Dipping into my depleted savings, I bought a ticket to fly home for my mother’s funeral. Browsing the airport bookshelves, I was drawn to a title I’d been hearing a lot about: The Power of Now.

I spent the entire ten-plus-hour flight with my head mostly stuck in that book.  When I wasn’t reading, I’d be sitting with my eyes closed, processing the new perspectives the book had given me.

Eckhart Tolle had a major epiphany that eventually led him to write The Power of Now.

I had a profound epiphany reading it.

I landed in England in an entirely different frame of mind.  For the first time in months, I felt free. The idea that I am not my thoughts was not new to me.  But somehow, I suddenly knew it differently. I had felt it.  And feeling it had freed me from all of the negative thoughts and emotions that had been keeping me locked in guilt, anxiety, fear, and panic.

The thing that struck me the most then, and has stayed with me ever since, is the knowledge—the truth—that all we ever have is NOW. Now is where we live our life. Now is the most precious thing, indeed the only thing, we ever have.

Right now, in this NOW moment, nothing is lacking.  We exist. We are. That’s it.  And that is freedom. Freedom from guilt, from anxiety, from fear, from panic, and many other negative thoughts and emotions, all of which cannot ever exist in the NOW moment, only in the past (as memories) or in the future (as projections).

For six months I’d tormented myself by living in the past and/or the future, making myself miserable, (thinking about what I’d had, regretting what I’d and lost, or what I had or hadn’t done, panicking about what might happen), making it impossible to enjoy each NOW moment that I had lived through. Where was the sense in that? What a waste!

In The Power of Now, Eckhart Tolle says that negativity and suffering have their roots in time. “Time and Mind,” he says, “are inseparable. Remove time from the mind and it stops—unless you choose to use it.  To be identified with our mind is to be trapped in time: the compulsion to live almost exclusively through memory and anticipation.”

There’s so much more I could write about The Power of Now. But nothing is as powerful as reading the book and feeling the truth of what Eckhart Tolle writes in your own body.  Suffice to say that he shows us how to recognize ourselves as the creators of our own pain, and how we can free ourselves from all the conflicting, negative thoughts and feelings that create pain in our lives by learning to live fully and intensely in the present, in the NOW.

One of the things I love about books, about knowledge, is that you can’t un-know what you know. Everything we learn transforms us at some level. The Power of Now transformed me profoundly. With sales well in excess of two million, I’m far from being the only one.   If, by chance, you haven’t read The Power of Now yet, make it a priority.  If you have, you likely already know that it’s one of those rare books that deserve to be read and re-read over and over again.

ECKHART TOLLE is widely regarded as one of the most inspiring teachers alive today.  His New York Times bestsellers The Power of Now and A New Earth, have been hailed as two of the most influential spiritual books of our time.

Growing up in a small town in post-war Germany, Tolle describes his early childhood as unhappy. His parents fought a lot and eventually separated. Unhappy at school, which felt like a hostile environment to him, he experienced considerable anxiety, fear, and depression, which continued to plague him through adolescence into early adulthood.

In The Power of Now,  Eckhart Tolle describes his transition from despair to self-realization soon after his 29th birthday. Awakening from sleep one night, suffering from feelings of depression that were “almost unbearable,” he experienced a life-changing epiphany. Recounting the experience years later, he said:

“I couldn’t live with myself any longer. And in this, a question arose without an answer: who is the ‘I’ that cannot live with the self? What is the self? I felt drawn into a void! I didn’t know at the time that what really happened was the mind-made self, with its heaviness, its problems, that lives between the unsatisfying past and the fearful future, collapsed. It dissolved. The next morning I woke up and everything was so peaceful. The peace was there because there was no self. Just a sense of presence or ‘beingness,’ just observing and watching.”

It took ten years for Eckhart Tolle to understand this transformation, during which time he evolved a philosophy that has parallels in Buddhism, relaxation techniques, and meditation theory but is also eminently practical.

The Power of Now went on to sell over two million copies and has been translated into over 30 languages. In 2018, The Power of Now Journal was published, highlighting Eckhart Tolle’s teachings in a journal format. www.eckharttolle.com.

DOWNLOAD YOUR FREE EXCERPT FROM "THE POWER OF NOW"