THE FIVE
LEVELS OF ATTACHMENT

Toltec Wisdom for the Modern World
by Don Miguel Ruiz, 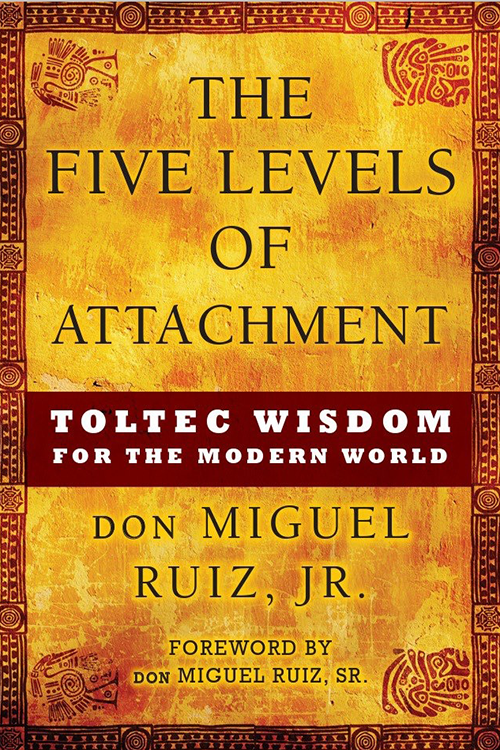 MASTER OF YOUR THOUGHTS,
CAPTAIN OF YOUR FATE

“Without awareness, your domestication and attachments will corner you into taking actions that will conform to the belief systems they have built.”—Don Miguel Ruiz, Jr.

It cannot be easy to step into the same arena as a parent or sibling who has enjoyed enormous worldwide fame. People can be hard on those they regard as taking an “easy path” to success. I’ll confess, I was a little doubtful too when I received a copy of Don Miguel Ruiz Jr’s book The Five Levels of Attachment back in 2015, along with a request to schedule him for a radio interview. But they vanished the moment I started reading The Five Levels of Attachments. didn’t last long.

The method don Miguel Jr. shares in The Five Levels of Attachments is said to have been 20 years in the making. When he began his apprenticeship into his family’s Toltec tradition at the age of fourteen, his first task was translating his grandmother’s talks from Spanish into English. One day, as he struggled to keep up with her, she asked him: “Are you using knowledge, or is knowledge using you?” Finding the answer to this question would shape the destiny of his life.

We like to think we are the masters of our thoughts and our fate. But how we think and what we believe about ourselves and our world are the result of an unwitting agreement that we made to accept a consensus reality that keeps us in bondage, restricts our freedom, and prevents us from knowing and expressing our authentic selves.

According to don Miguel Ruiz, Jr., we have all unwittingly made agreements about how we choose to live our lives and what we believe our truths are. But what we may not realize is that each one of these agreements represents an attachment, a limiting filter on who we think we are, and what the future could hold.

We call these attachments knowledge without ever questioning if that knowledge is necessarily true for us.

Building on the principles found in his father’s best-selling book The Four Agreements, don Miguel Jr., explains that there are five levels of attachment that cause suffering in our lives: Authentic Self, Preference, Identification, Internalization, and Fanaticism.

After describing each level in detail,  he demonstrates how, as our level of attachment to a belief or idea increases, “who we are” becomes directly linked to “what we know.”

Don Miguel, Jr. does an excellent job of explaining what is happening in our world today where so many of us are operating unconsciously at a level of attachment to beliefs that we rarely question and never truly understand how or why we embraced them in the first place. Using some very cleverly constructed and eminently relatable analogies, he invites us to reflect on how attached we are to our own points of view and helps us gain awareness of the agreements we have been implicitly making all these years, which have shaped our reality and influence our future.  And in the process, he shows us how to release the attachments that no longer reflect who we really are.

I especially enjoyed and admired don Miguel Jr’s chapter on Fanaticism (something that we are being made acutely aware of in today’s climate of political, social, and ideological bifurcation). In choosing to use football as his analogy here, he not only did a brilliant job of making the book relatable to men (particularly those who would not normally read anything that seems remotely “spiritual”), but he also helped women understand why men are so passionate (and fanatical) about their football teams!   (Frankly, I’ve been struggling to understand that one for years!)

After showing us how our attachment to beliefs—our own and those of others—manifests as a mask we don’t realize we can take off, Don Miguel demonstrates with the help of some Toltec Wisdom, how we can return to our true, Authentic Selves, unhindered by judgment and free to pursue our true life’s calling.

This was the first of Don Miguel Jr’s books that I read, and it made me eager to read more, which is saying something, given the number of books I have to read for my job.  And while I’ve found each to be equally thought-provoking, insightful, and filled with simple, irrefutable truths and wisdom that can’t help but shift one out of old patterns and mindsets,  The Five Levels of Attachment and The Mastery of Self – A Toltec Guide to Personal Freedom, remain my favorites (thus far!).

I’ve learned many valuable things from don Miguel Jr’s books that have helped me transform my perspectives and mindset.  As wisdom keepers and teachers go, don Miguel Ruiz, Jr. is, for me, a teacher who has not just earned the right to stand alongside his father on any platform, but a true master who deserved a spotlight of his very own.

FREE FOR YOU: Download an excerpt from The Five Levels of Attachment below. 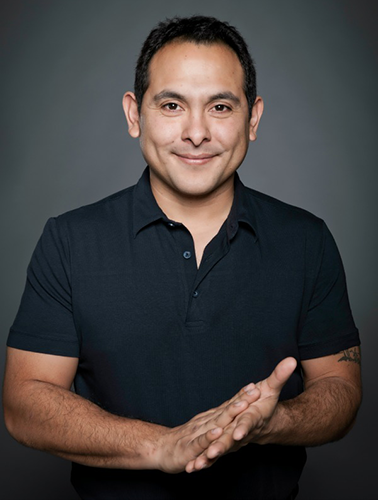 DON MIGUEL RUIZ, JR., is a Nagual, or a Toltec Master of Transformation, and the author of several books. He is a direct descendant of the Toltecs of the Eagle Knight lineage and is the son of don Miguel Ruiz, Sr., author of The Four Agreements.

At the age of 14, he apprenticed to his father don Miguel Sr. and his grandmother, Madre Sarita. From that early age, he was called upon to translate Madre Sarita’s prayers, lectures, and workshops from Spanish into English. Through constant repetition and review, he learned the content of her teachings in both languages.

Through interpreting for Madre Sarita, don Miguel Jr. came to understand the power of faith and saw first-hand how she manifested her intent to heal people, both physically and spiritually. His apprenticeship lasted ten years. When he reached his mid-20’s, his father intensified his training. At the apex of this power journey, don Miguel said to his eldest son, “Find your way out. Go home and master Death by becoming alive.”

For the past six years, don Miguel Jr. has applied the lessons learned from his father and grandmother to define and enjoy his own personal freedom while achieving peace with all of creation.

Today, don Miguel Jr. is married and has two young children. As a Nagual,  he now passes on the tools of his family’s traditions in helping others to achieve optimal physical and spiritual health so that they may find their own personal freedom.

His books includeThe Five Levels of Attachment, which has gone on to become a bestseller around the world, Living a Life of Awareness, The Mastery of Self, don Miguel Ruiz’s Little Book of Wisdom,and The Seven Secrets to Healthy, Happy Relationships.

You can find out more about don Miguel’s work, books, and events at  www.miguelruizjr.com

Read Don Miguel Jr’s 10 Best list of Spiritual books that influenced him the most on his spiritual journey.

FREE FOR YOU: Download an excerpt from The Five Levels of Attachment below

DOWNLOAD YOUR FREE EXCERPT FROM THE FIVE LEVELS OF ATTACHMENT HERE
CLICK TO EXPERIENCE MORE OF DON MIGUEL JR.