The Dark
Side of the
Light Chasers

Reclaiming your power, creativity, brilliance and dreams
by Debbie Ford 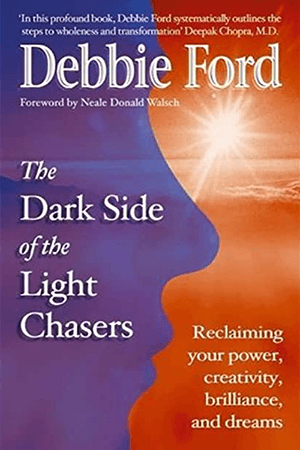 “BEHIND OUR SOCIAL MASKS LURK THOUSANDS OF FACES. EACH FACE HAS A PERSONALITY OF ITS OWN”

Debbie Ford’s The Dark Side of the Light Chasers was a real game-changer for me.  Published in 1998, I first picked up the book in 2001 when I was looking for a suitable segment to share in the Book Excerpt section of PLANETLightworker a monthly online spiritual magazine I had founded in 1999.

We only had room to publish a finite number of words, so I had to find a really juicy section that would draw my readers in. But once I got stuck into the book, I realized I had a big dilemma on my hands—there was so much wisdom, so many startling aha’s! to shift my thinking—everyone’s thinking—that I was paralyzed by choice.

The book was so damned provocative that I had to keep taking breaks to ruminate on its implications. Having long been interested in psychology, I was familiar with Jung’s shadow archetype theory, but everything I knew about it was in my head. I’d never really related to it personally because it hadn’t been reached the muscle—that place of genuine physical and emotional gnosis as opposed to mere intellectual understanding.

When truth strikes you it resounds like a bell. Denial is fruitless. Everything changes. Suddenly, with Debbie Ford’s down-to-earth explanations, and exercises, it became very personal, very real, and very much in my face. Everything I had acknowledged in others but had refused to see in myself was laid bare. Indeed, I met myself in so many of Debbie’s stories, explanations, and sharings that the book might just as well been titled I’m Talking About YOU, Sandie Sedgbeer!

As a long time student of astrology, numerology, and other esoteric tools designed to give us an understanding of ourselves and others, I knew all about the positive and negative attributes associated with the different signs and numbers. But when it came to me, I had conveniently focused my attention on the “positive” and thrown a huge blanket over the less savory. I met myself in every one of Debbie Ford’s chapters. I recognized me in every example, every anecdote, and every explanation. Every undesirable aspect of my character, every squirm-worthy facet I’d refused to acknowledge showed up. And Debbie Ford firmly and lovingly showed me not just how to confront my shadows but to own them and embrace them.

As  Debbie Ford explains in The Dark Side of the Light Chasers: “Our shadow, formed long ago, contains all the parts of ourselves that we have tried to hide or deny, the parts we believe are not acceptable to our family, friends and, most importantly, ourselves. It is made up of everything that annoys, horrifies or disgusts us about other people or about ourselves. It holds all that we try to hide from those we love and all that we don’t want other people to think about us or find out about us. As the great Swiss psychologist C.G. Jung says, our shadow is the person we would rather not be.

From its invisible home deep within our psyche, the shadow wields enormous power over our life. It determines what we can and cannot do, what we will be irresistibly drawn toward, and what we will do almost anything to avoid. It dictates our attractions and our repulsions and determines what we will love and what we will judge and criticize. Our shadow controls how much success we’re entitled to create or how much failure we’re doomed to experience. The shadow is an oracle that predicts all of our behaviors, driving the way we treat those around us—and how we treat ourselves.

But our shadow can only wield its power over us when we keep it in the dark. And instead of something to be denied, feared, or rejected, the shadow has our most treasured gifts: the essence of who we are. When we bring light to the darkness, we find the fundamental parts of our true self buried inside—our greatness, our compassion, our authenticity. And as we explore this part of ourselves we most feared, we become free—free to experience the full range of our humanness, free to bask in our glorious totality, free to choose what we do in this world. Our shadow delivers us the blessing of our entire self.

The shadow is not a problem to be solved or an enemy to be conquered, but a fertile field to be cultivated. When we dig our hands into its rich soil, we will discover the potent seeds of the people we most desire to be.”

If you’re ready to confront, embrace, and integrate all of who you are, there’s no better place to start than with this book.

Embracing Your Dark Side

Most of us long to experience peace of mind. This is a lifelong pursuit, a task that calls for nothing less than embracing the quality of our being.  Discovering the gifts of even our most hated qualities is a creative process that needs only a deep desire to listen and learn, a willingness to release dysfunctional judgments and beliefs, and a readiness to feel better. Your true self makes no judgments to protect us. Only our fear-driven egos use judgments to protect us—protection that ironically prevents us from self-realization. We must be prepared to love all that we have feared. “My grievances hide the light of the world,” says A Course in Miracles.

To get past your ego and its defenses you need to get quiet, be brave, and listen to your inner voices. Behind our social masks lurk thousands of faces. Each face has a personality of its own. Each personality has its own unique characteristics. By having intern dialogues with these sub-personalities you will turn your egotistical prejudices and judgments into priceless treasures. when you embrace the messages of each aspect of your shadow, you begin to take back the power you’ve given to others and form a bond of trust with your authentic self. The voices of your unembraced qualities, when allowed into your consciousness, will bring you back into balance and harmony with your natural rhythms.  they will restore your ability to resolve your own issues and illuminate the purpose of your life. These messages will lead you to discover authentic love and compassion.

FREE FOR YOU: On the fifth anniversary of Debbie Ford’s death, a lost manuscript, written during Debbie’s long battle with cancer, was published.  Discovered among Debbie’s belongings by her sister, Arielle Ford, acting on a message from the medium James Van Praagh, Your Holiness combines motivational prayers with deeply personal stories about Debbie Ford’s own spiritual journey to offer a practical path for transformation. DOWNLOAD YOUR FREE EXCERPT BELOW. 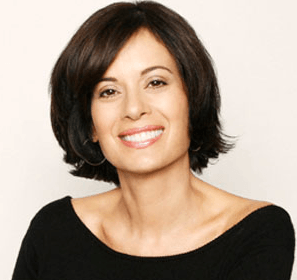 DEBBIE FORD  was an internationally recognized expert in the field of personal transformation. A self-help author, coach, lecturer, and teacher whose first book,  The Dark Side of the Light Chasers, became an instant New York Times best-seller after she appeared on the Oprah Winfrey show.

Debbie went to write eight more books including  A Spiritual Divorce, The Secret of the Shadow, and Why Good People Do Bad Things,  which have collectively sold over 1 million copies and been translated into 32 languages.

Beloved by many for her honesty, courage, and willingness to share her own challenging experiences in life, including the loneliness, depression, and heartbreak that catalyzed her desire to write and help others, Debbie Ford gave millions of people the impetus to integrate their dualistic nature and embrace their  “shadow,” side.

Debbie Ford died in 2013 of cancer. She was just 57, but her legacy continues to open the hearts of people across the globe, bringing them the gift of self-love and emotional freedom.  Her books are used and shared in universities and institutions of learning and enlightenment worldwide. www.debbieford.com.

If you enjoy this excerpt and decide to buy the book, make sure you visit DEBBIE FORD’S WEBSITE where you can not only get some helpful free gifts but also gain access to a private video of the world-famous medium, James van Praagh facilitating a conversation between Debbie Ford and her sister Arielle Ford, about the lost manuscript, life and the view from planet Earth and us from the other side.