The necktie and
The Jaguar

A memoir to help you change your story and find fulfillment 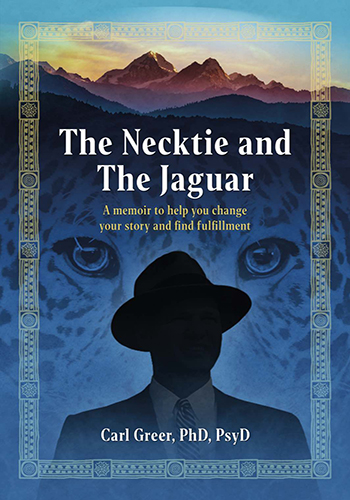 “You don’t have to feel trapped in a story someone else has written for you.”— Carl Greer, PhD

Having read and greatly enjoyed Carl Greer’s first two best-selling books, Change Your Story, Change Your Life and Change the Story of Your Health, I was intrigued to read his recently released memoir, The Necktie and the Jaguar: A Memoir to Help You Change Your Story and Find Fulfillment, in which he shares his own journey of transformation.

As a retired Clinical Psychologist and Jungian analyst, businessman, Shamanic practitioner, author, and philanthropist, I knew that he had  many great stories to tell as well as first-hand experience of the kind of life transformations that his earlier books had suggested we all could have. What I hadn’t anticipated was that in writing his memoir, he would also be providing us with an illuminating roadmap to individuation and personal transformation.

To share a little of his story:  Carl Greer’s journey of transformation took him from a post war mid-western, middle class upbringing tainted by a childhood tragedy that taught him to constrict his emotions, to career success and wealth as the president of an independent oil and gas company to mid-life, when he recognized that his spiritual self was crying out for nourishment and expression.  Undergoing Jungian analysis and becoming an analyst himself offered some soul nourishment. As did studying and practicing martial arts, whose principles helped him navigate challenges in the world of work. Still, it wasn’t until Greer took a deep dive into shamanic training and practice that he was able to embody the qualities and emotions he had long denied and turn his attention to philanthropy.

Writing about his spiritual practices and reflecting on his vulnerabilities, Greer tells of honoring his longings for purpose and meaning, journeying to transpersonal realms, reinventing his life, and devoting himself to service to others while living with deep respect for Pachamama, Mother Earth.

It takes a lot of courage to change the entire course of one’s life. To lovingly let go of a marriage that has completed its contract, and to turn one’s back on more than one successful career to follow your soul’s calling to the next evolution of your unfolding is no easy task. The journey to becoming a shaman is not for the faint-hearted, so I have all the more respect for Mr. Greer for his determination to dig deep inside himself and follow the call of the jaguar.

As Carl Greer learned, you don’t have to feel trapped in a story someone else has written for you. And what he did to create a bigger, more fulfilling life for himself, was every bit as intriguing, and inspiring as I had expected.

But that is not what ultimately made this book a stand-out for me. It was the fact that Greer has taken reader engagement to a whole other level by including truly thought-provoking questions at the end of each chapter related to his own experiences and insights that gently encourage us to reflect on our own lives and decisions so we too might break through old patterns and live according to the needs of our soul.

I’m not really a fan of workbooks. It’s not that I’m averse to practising self-inquiry, or doing my “inner work”; it’s just that I prefer to have my psyche gently prodded by another’s experience or ruminations than to be confronted with a list of questions that I am told I must take time to ponder and digest. Some people love that process, but it’s always felt a bit forced to me.  And that’s why I was so impressed by The Necktie and the Jaguar.  Greer’s reflections on his own life wormed their way into my head and cleverly planted  little seeds of transformation into my psyche in such a gentle, effortless way that they bypassed any resistance I might have felt if they had been presented in any other way.

There are some really good writers and teachers out there, and some books that have proved so helpful in opening up readers’ minds to their greater potential and the larger truths in life that they instantly become word-of-mouth best sellers. In my opinion, Carl Greer has done a brilliant job of writing a memoir that doesn’t just inform and entertain his audience, but also includes some valuable keys to transform our own lives.

That’s what I call masterful writing and teaching.

If you. haven’t watched our weekly Face to Face With… live Video interview series, you can catch up with them (and sign up to SAVE YOUR SPACE) HERE.

CARL GREER, PhD, PsyD, is a retired clinical psychologist and Jungian analyst, a businessman, and a shamanic practitioner, author, and philanthropist, funding over 60 charities and more than 850 past and current Greer Scholars.

He received his PhD from Columbia University and was on their faculty teaching finance and management in their graduate school of business. He moved to Chicago to work for an oil company and, after focusing on business for many years, he earned a doctorate in clinical psychology, and then became a Jungian analyst.

The shamanic work he does is drawn from a blend of North American and South American indigenous trainings and is influenced by Jungian analytical psychology. He has trained with Peruvian shamans and through Dr. Alberto Villoldo’s Healing the Light Body School, where he has been on staff. He has worked with shamans in South America, the United States, Canada, Australia, Ethiopia, and Outer Mongolia.

Carl Greer is involved in various businesses and charities, has taught at the C. G. Jung Institute of Chicago and been on the staff of the Replogle Center for Counseling and Well-Being, and has held workshops on Jungian and shamanic topics. He is the best-selling, award-winning author of Change Your Story, Change Your Life and Change the Story of Your Health. His new book, a memoir titled The Necktie and The Jaguar is published by Chiron Publications in 2021. For more, visit CarlGreer.com

FREE FOR YOU: Download your excerpt  from The Necktie and The Jaguar below

by Sandie Sedgbeer | on What is Going Om